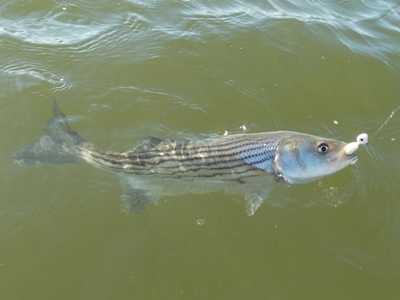 The fall fishing season is influenced by a number of environmental factors. The combination of shorter days, falling temperatures, changing weather patterns, and other phenomenon trigger striped bass to begin migrating from rivers and creeks to the main bay and eventually into the Atlantic Ocean.

In the Chesapeake Bay, striped bass migrations coincide with seasonal movements of other bay inhabitants including menhaden, bay anchovies, seatrout, croakers, white perch, eels, crabs, and others. Many of these are preyed upon by hungry stripers as they travel hundreds of miles down the estuary.

By September, striped bass begin moving down the Susquehanna and other rivers into the upper bay. The process continues throughout the estuary, with more and more fishing moving downward as the season progresses.

As striped bass gather into schools, they often segregate by size. Schools of smaller fish are often indicated by the presence of terns or gulls which arrive to feed on scraps of baitfish. Schools of small stripers are often abundant in the early season, especially on the surface. Although vastly outnumbered by undersize fish, occasionally larger stripers will orient below a school of surface-feeding fish.

Meanwhile, in areas such as the Tangier and Pocomoke Sounds, striped bass begin arriving in shallow areas to feed on small spot, late season soft-shelled crabs, and other prey species. During the early fall, striped bass are sometimes found in shallow water along with speckled trout, gray trout, bluefish, and red drum.

When fishing for striped bass in shallow water, some anglers bottom fish with baits such as peeler crab, bloodworms, and cut spot. The use of artificial lures is also popular during the fall fishing season. Anglers cast small bucktails, soft plastics, and other lures in productive areas. Trolling is also effective in shallow water, especially when fish are scattered over a wide area.

As water temperatures continue falling, more and more forage species move into open water. The exodus often occurs suddenly as a result of strong storms. This event marks a critical turning point for Chesapeake Bay striped bass fishing. As the fish begin arriving in the main bay, fishermen converge from every port.

In the middle Chesapeake Bay, much of the fishing action occurs along the main channel from Deale down to the Maryland – Virginia line. Striped bass are also caught along the eastern side of the bay as well as in Tangier and Pocomoke Sounds.

Anglers use a mix of techniques to catch striped bass in open water. Trolling is the most common technique. Deep water trolling is especially popular on large charter boats although smaller boats often join the fleets.

Much of the early season deep water trolling is focused on small to mid-sized rockfish. To target specific classes of fish, anglers match lure sizes to common prey species that are present along fishing areas.

In some areas, light tackle jigging is also popular for deep water fishing. Anglers use a variety of lures including metal slab jigs, bucktails, soft plastics, and others for catching stripers.

The arrival of large menhaden, herring, and other baitfish marks another important turning point for the fall striped bass fishery. Schools of these large baitfish usually appear in the mid and lower bay in November and remain into December.

Stalking the schools of bait are striped bass ranging from sub-legal schoolies up to trophy-class fish that can exceed 48 inches in length. The melee increases as exiting Chesapeake Bay stripers are met by ocean run fish that have migrated down the Atlantic Coast and then entered the lower bay.

Ocean run striped bass usually become more common in the lower Chesapeake Bay after Thanksgiving. They sometimes move up the bay as far as the Maryland line and remain until water temperatures drop into the low 40’s.

At the mouth of the bay, striped bass are caught near the Chesapeake Bay Bridge-Tunnel. The complex, which includes hundreds of concrete pilings, four artificial islands, two tunnels, and extensive rubble, sustains year-round populations of striped bass.

By mid October migrating stripers begin arriving from the Atlantic as well as the Chesapeake. As the weather turns colder, the action builds, with anglers catching fish on the structure right up until New Year’s Eve.

In addition to casting, trolling, and jigging, live eels are popular at the Chesapeake Bay Bridge-Tunnel. Using Carolina bait rigs, anglers drift eels near bridge pilings, rockpiles, and nearby shoals. Fishing with live eels is also popular along the steep drop off that runs from Cape Charles to Kiptopeake.