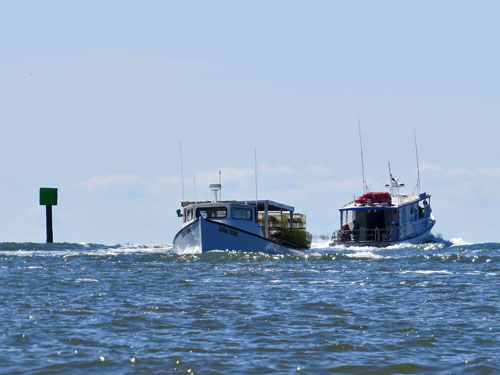 Smith Island is a small island in the Chesapeake Bay. The eastern side of the island is bordered by the Tangier Sound while the western side faces the main shipping channel. Just north of the island, Solomon’s Lump Lighthouse guides mariners navigating Kedges Straits.

Smith island is home to three small communities, Ewell, Tylerton, and Rhodes Point. Nearby islands include Holland Island to the north and Tangier Island to the south. The nearest mainland port is Crisfield, on the Delmarva Peninsula. The two towns are closely linked in culture.

Smith Island commercial fishermen rely heavily on crabbing, especially harvesting crabs are about to molt, known as “peeler crabs”. Watermen catch crabs by traps, nets, or scrapes and then hold them in tanks until they shed their shells and become “soft shelled crabs”, a valuable seafood product.

The island is famous for “Smith Island cakes”. Generations ago, Smith Island women started baking cakes composed of several pancake-thin layers that are iced with chocolate or other types of icing.

Historians claim the cakes originally had as few as four layers. Modern day Smith Island cakes usually has up to 10 layers and stands about three inches high.