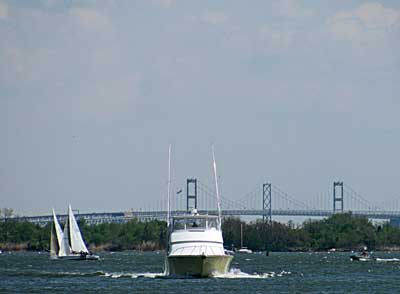 Annapolis is the capital of Maryland and an important port city of the Chesapeake Bay. The city is rich in history and known for its beauty, architecture, schools, art community, shops and harbor. Annapolis was once a vital port for shipping and commercial fishing operations. Today the city and port is a top vacation and site seeing destination.

The atmosphere of the city is robust, with strong influences coming from the government facilities, legal professions, educational institutions, art community, local seafood industry, and the Chesapeake Bay boating culture. Its waterfront is a key attraction to the city and a vital component of area culture.

The city dock serves as the hub of the waterfront district. One of the most beautiful ports in the Mid-Atlantic region, the Annapolis waterfront has undergone several ups and downs leading up to its current design.

The Annapolis City Dock has been nationally recognized for its reconstruction, receiving the Outstanding Small Project Award for 2009 from the American Society of Civil Engineers (ASCE).

Annapolis Harbor and several nearby areas have been designated as federally approved No Discharge Zones (NDZ).

Boaters consider the city and port to be among the top destinations of the Atlantic Coast. Each October, the United States Sailboat Show and the United States Powerboat Show are held in the harbor of Annapolis. The events are the oldest and largest in-water shows in the industry, attracting hundreds of exhibitors and thousands of power boating and sailing enthusiasts.

The Annapolis area has a number of public recreation areas. Sandy Point State Park features a public beach for fishing and crabbing.

Located nearby, are some of the bay’s most recognizable landmarks, including the Chesapeake Bay Bridge and Thomas Point Light.