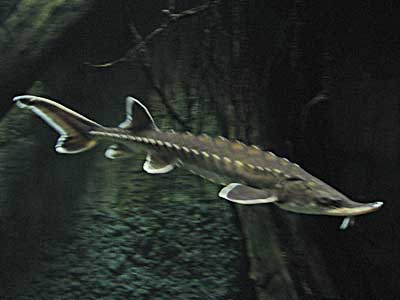 The Atlantic sturgeon can be distinguished from other sturgeon species by its long, narrow snout,  relatively small mouth, and four barbels. Adults are olive- green to blue-black above, with white undersides.

In the Chesapeake Bay and several other coastal estuaries, Atlantic sturgeon are listed as endangered or threatened by the U.S. Fish and Wildlife Service. Several Atlantic Sturgeon restoration programs have been launched, although much work remains.

Atlantic sturgeon lead anadromous lifestyles. Adult sturgeon migrate up rivers to spawn. After hatching, young sturgeon live in freshwater rivers for several years. Eventually, juvenile fish migrate out to sea where much of their lifestyle remains a mystery.