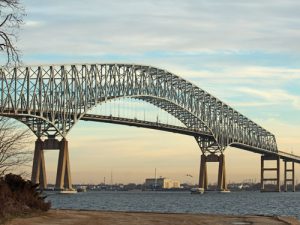 The Algal Flow-way Technology (AFT) is a linear raceway constructed at the Helen Delich Bentley Port of Baltimore’s Dundalk Marine Terminal, located on the Patapsco River, which feeds into the Chesapeake Bay.

The AFT pumps water from the Patapsco River onto the raceway, which flows over a surface designed to enhance algal growth. As the algae grows, it cleans and oxygenates the water prior to its return to the river.

The AFT project is one of many environmental Initiatives at the Port of Baltimore.

The Diesel Equipment Upgrade Program, through which the Port of Baltimore replaces older diesel-powered equipment with newer, more efficient versions. Since 2008, 217 older dray trucks, 110 pieces of cargo-handling equipment, 16 locomotive engines and 10 marine engines have been replaced or retrofitted. This has resulted in emissions reductions of 3,304 tons of nitrogen oxide, 922 tons of carbon monoxide, 165 tons of particulate matter and 141 tons of hydrocarbons.

A recently installed stormwater management system at Fairfield Marine Terminal uses a large underground sand filter that absorbs and treats runoff from the terminal’s 14 acres. The sand filters help ensure nutrients, debris and sediment are filtered from stormwater before entering Baltimore’s harbor. A similar system is also in place at the Dundalk Marine Terminal.

The MDOT MPA dredging program uses sediment dredged from shipping channels that lead to the Port to restore wetlands and eroding islands. Poplar Island, in the Chesapeake Bay off Talbot County, has been rebuilt to its original 1,150 acres using dredged material.

Today the island is home to a variety of wildlife and waterfowl. Poplar Island also is an important nesting ground for terrapins. In addition, Hart-Miller Island in Baltimore County has been rebuilt using dredged sediment and is a popular recreation site for boaters.

At Masonville Cove on the Patapsco River in Baltimore, MDOT MPA cleaned and restored a shoreline that was severely polluted by decades of industrial activity. Work removed 27 abandoned vessels and more than 61,000 tons of trash. Visitors can enjoy trails and observe many species of birds and waterfowl at Masonville Cove.

MDOT MPA provides funding to restore oyster beds in the Chesapeake Bay. This initiative allows oysters to filter pollutants from the river and create food and habitat for other species.

Last year the Port of Baltimore handled a record 43.6 million tons of cargo, including more than 11 million tons of general cargo at the public marine terminals. The Port ranks first among the nation’s ports for volume of autos and light trucks, roll on/roll off heavy farm and construction machinery, and imported gypsum.

The Port ranks 11th among major U.S. ports for cargo handled and ninth nationally for total cargo value. A record 857,890 cars and light trucks crossed the Port’s public and private piers in 2019, the most in the U.S. for the ninth consecutive year. The Port also handled a record 657,059 containers at the public terminals.

The Port of Baltimore’s infrastructure, including its existing 50-foot berth and supersized cranes, are results of the public-private partnership (P3) between MDOT MPA and Ports America Chesapeake.

The 50-year agreement, signed in 2009, generated thousands of jobs and continues to result in increased tax revenue for the state and funds for the Transportation Trust Fund.

As part of the P3, work is progressing on a second 50-foot berth that will allow two massive ships to visit the Port at the same time. That berth, and four new supersized cranes, are expected to be operational by summer 2021.

The Port’s growing container business also accentuates the need for the Howard Street Tunnel expansion project in Baltimore, which will accommodate double-stacked rail cars to move cargo from the Port.