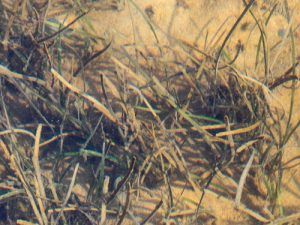 Updated research from the Chesapeake Bay Program reveals a 38% decline in underwater grasses from the previous year, when the Bay may have supported up to 108,078 acres.

Experts attribute the losses largely to a decline in widgeon grass, a species whose abundance can rise and fall from year to year and responds easily to weather events or changes in water quality.

Though the precise cause for the fall in widgeon grass in 2019 is unknown, a contributing factor may have been higher than average river flows entering the Bay, which reduces water clarity and blocks sunlight from reaching the grasses.

In 2019, an estimated decline of 34,986 acres was observed in moderately salty waters, particularly in the Tangier Sound area, which experienced an 18,452-acre decline. Overall, the lower central Chesapeake Bay saw fewer grasses, both in the Maryland and Virginia portions.

However, certain areas did see a growth in grass abundance. The Sassafras River in northeast Maryland, the Severn River in central Maryland and the middle and upper portions of the Rappahannock River in Virginia noted modest increases.

To learn more about the Chesapeake Bay Program’s progress toward achieving and sustaining 185,000 acres of underwater grasses Bay-wide, visit chesapeakeprogress.com.