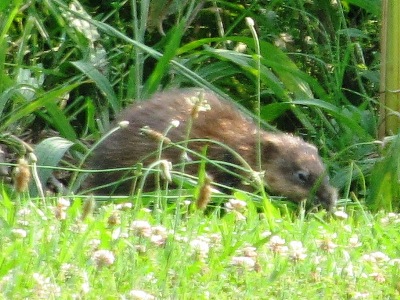 The muskrat (Ondatra zibethicus), is one the most recognizable aquatic mammals that inhabit the Chesapeake Bay watershed. Muskrats have webbed rear feet, thick fur and a long, scaly tail. They grow to approximately two feet long from nose to tail. Their fur coloration varies from nearly black to reddish, with most individuals having chestnut brown fur.

Although this aquatic rodent resembles a large rat, the two animals share very little in common. Muskrats prefer marshes, ponds, lakes, rivers, and streams. In the Chesapeake Bay region, muskrats have adapted to suburban life. They are often found in roadside ditches and have become increasingly common in sediment ponds and other urban water sources.

Muskrats feed on vegetation, especially roots. In marshes, they excavate extensive tunnel systems in order to feed on the roots and tubers of semi-aquatic plants. Their tunnels also provide shelter from predators.

Throughout the Chesapeake Bay, muskrats are harvested for their fur and meat. Muskrats are usually caught by traps which are placed at the entrances of runs (tunnels).