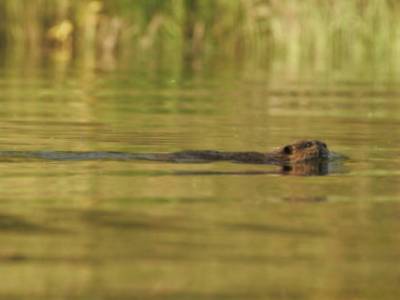 After facing near extermination during the colonial era, beavers have made a comeback in the Chesapeake Bay watershed. Although they avoid saltwater, beavers are common in streams, swamps, and tidal creeks that drain into the Chesapeake. Beavers inhabit parts of Pennsylvania, Delaware, Maryland, and Virginia.

Although most people associate beavers with dam building, the behavior is not always necessary.  In some habitats, such as highland streams beavers build dams to create storage ponds. In contrast to this type of lifestyle, beavers of the Chesapeake Bay Watershed often behave quite differently.

In the Chesapeake Bay watershed, mild winter winter allows many waterways to remain ice free almost all year round. With an abundance of open water and food sources, beavers are able to feed unrestricted. On some rivers and creeks, beavers move seasonally in order to feed on various plants. Their diets are similar to upland beavers, consisting of twigs, tree bark, and other plant material.

Although beavers of the Chesapeake Bay region often do not build dams, they do take down trees. Their tree-cutting activities are often a gradual process which may span months or years. They also abandon trees after stripping bark from their lower trunks. Despite their apparent lack of persistence, many trees eventually fall, either from direct cutting by beavers or from hurricanes and other powerful storms.

Despite being common, beavers are rarely seen by humans. Much of their feeding occurs at night or near twilight, when few people are around. Although beavers are less active during the day, encounters happen in some areas.

Fishermen, kayakers, amateur photographers, and other explorers occasionally encounter beavers along creeks or other waterways. To view beavers successfully in their natural habitats, enthusiasts must be willing to travel into remote areas, and move with very little noise or movement. 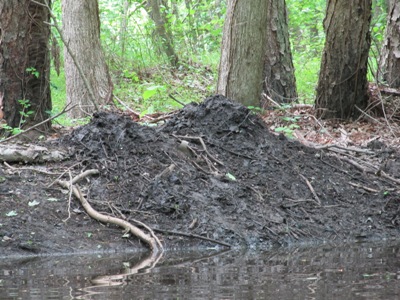 The presence of beavers on a body of water is usually indicated by a number of clues. Although dams are less common in the Chesapeake Bay region, some beavers build huts or burrows along the shoreline. Chew marks on tree trunks or saplings are another indicator of beaver populations. In some areas, beavers mark their territory with mounds of mud.

In addition to visual indicators, beaver enthusiasts sometimes hear beavers. Although these aquatic mammals are sometimes reluctant to appear in the open, they may announce their presence by slapping the water with their flattened tail. The gunshot like sounds emitted by beaver tail-slapping can be heard for considerable distances.