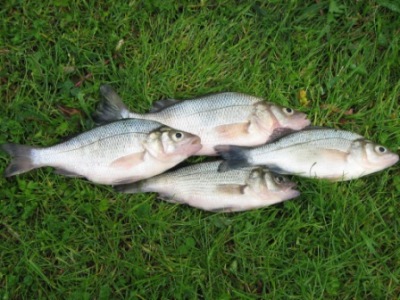 The white perch is one of the most common fish found in the Chesapeake Bay. Although smaller in size than striped bass, these pan-sized fish share a number of traits with their larger cousins.

In the Chesapeake Bay watershed, white perch migrate seasonally. From late fall thru early winter, tidal white perch move into deeper areas in response to decreasing water temperatures. In late winter thru early spring, white perch begin moving back into rivers and creeks to spawn. During spring spawning runs, they sometimes caught together with yellow perch. In many rivers and creeks, white perch remain far upstream for the summer season, feeding on abundant food sources. By fall, the migratory cycle begins again.

How to Catch White Perch

Once located, white perch are usually easy to catch. In the upper bay, they are often present around oyster bars, artificial reefs, and other areas of hard bottom. They respond well to cut baits, especially bloodworms, peeler crab, shrimp, or fresh clams. Although often difficult to acquire, live grass shrimp are especially effective for catching white perch. Regardless of the type of bait used, choosing small hooks and being vigilant is important as these fish are accomplished bait stealers.

Artificial lures for catching white perch include small jigs, spinnerbaits, inline spinners, and crankbaits. They can be caught by vertical jigging, or by casting along piers, rocky outcrops, shorelines, and other structure.

During their spring spawning runs, anglers sometimes combine artificial jigs with live or cut baits for catching perch. This technique works especially well when white perch are found together with yellow perch.

Popular rigs include simple shad darts or marabou crappie jigs tipped with small live minnows or sections of bloodworms or other cut baits. Bait-jig combos work well in creeks where perch and other panfish often orient to downed trees or other snags.

How To Cook White Perch

White perch make excellent table fare. They usually fried, grilled, or baked. Some anglers simply head and gut the fish and cook them whole. Others choose to fillet their catch. During early spring, anglers carefully remove sacs of roe from female perch, which are highly prized. White perch roe is traditionally floured and fried or cooked by scrambling them together with chicken eggs.